My progress with the SimpleCV update was somewhat mixed yesterday. I was able to go from a low of tracebacks on any image operation to a high of loading two photo formats (though not stored with quite the right attributes) before encountering dependency tracebacks on img.show(). Hooray! But I also began to suspect that OpenCV might have become simple enough to use with a few key documentation improvements.

SimpleCV was written at a time that OpenCV, which has been around since 2001, used a C-dependent structure (IplImage – a format taken from the Intel Image Processing Library) to store image data and metadata. It was pretty foreign to Pythonic styles because of things like manual memory management. SimpleCV manages image processing by standardizing IplImages into bitmap or matrix formats, though there do seem to have been some attempts to include numpy array functionality later on, as that format was first being implemented. These days, OpenCV operates primarily on Matrices; the Python wrapper draws heavily on Numpy arrays in particular. 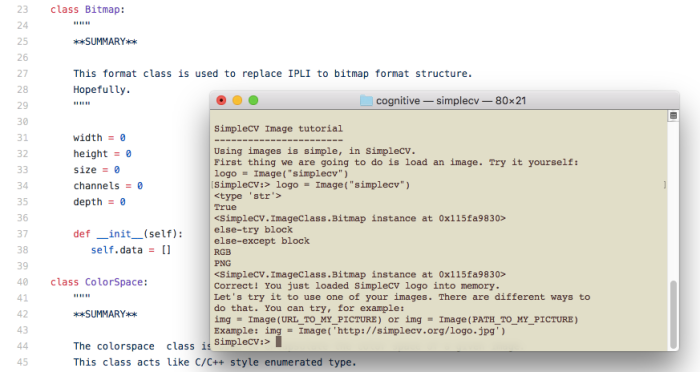 The file that I spent most of my day in was ImageClass.py, the core component of SimpleCV’s data model. In working through the tracebacks, I created a Bitmap class to hold information as closely as I could find information to help me construct it. I began questioning the need for the use of Bitmaps right around when I got to tracebacks in which OpenCV was expecting Numpy arrays.

My process so far has included a lot of hacking and workarounds to see if I can appease cv2 with as few changes as possible. However, I’m getting closer to a point that I will just start restructuring the entire Image class to reflect the structure now used by OpenCV. The authors may have abandoned the project for good reason, now that OpenCV is more directly usable by Python developers. However, I am enjoying the update process and will continue working through the broken bits. If nothing else, they’ve got a decent shell interface that I’d like to be able to use for teaching OpenCV.

View all posts by Marissa Utterberg

This site uses Akismet to reduce spam. Learn how your comment data is processed.